Georgia Southern University discovered all the benefits an iris-based biometrics ID system has over a fingerprint one, including speed and accuracy. 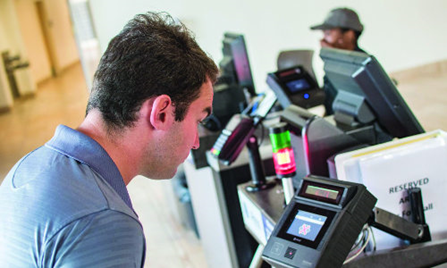 A student uses an iris-based ID authentication system at the campus dining facility.

Students with meal plans at Georgia Southern University no longer have to fumble through a backpack or wallet looking for an ID card to access either of the campus’ two dining commons.

Instead, they can stop at a turnstile, look into an iris reader and a second later they’re on their way to selecting dinner.

Three years ago, the university started an iris biometric program to quickly and accurately identify students and link their purchases to Georgia Southern’s existing one-card system. The system is a hit with administrators.

“We wanted something that would be easy for students to use,” says Richard Wynn, director of the university’s one-card program known as the Eagle Card. “And it has been. Students caught onto to it right away.”

“I’d stand there and watch a student try four, five, even six times before the [fingerprint] reader identified them and opened the turnstile,” he says. “That could be 10-15 seconds. Looking at that the administrative team agreed to add an iris reader on one of the two turnstiles.”

Wynn explains the iris readers are used three times as often due to their speed and convenience. Up to 8,000 students use the rec center’s iris-based reader each week.

Back in the campus’ dining commons, the iris system has totally replaced fingerprint readers. Wynn called the decision a “no brainer” as the noncontact iris readers are also more hygienic.

Thousands of students, staff and faculty touched the fingerprint readers each day. The iris system also lets his department save money by requiring fewer cashiers to identify students solely by their Eagle Cards.

“Students are always changing their look with new hairstyles, makeup, facial hair, glasses or tattoos so it can be hard for a cashier to recognize a person based on a photo taken during freshman enrollment,” Wynn says. “Now we can have one cashier manage multiple lanes.”

The Eagle Card enrollment generally takes place during freshman orientation. As students wait for the card to drop from the printer — it takes about 30 seconds — they also enroll their irises in the Iris ID solution that integrates with the one-card system from Blackboard Transact.

Faculty and staff using the commons or rec center may also enroll. Georgia Southern, in Statesboro, Ga., has just over 20,000 students on campus, along with 2,400 faculty and staff members. Wynn says nearly all students are enrolled in the iris solution.

The iris is the colored part of the human eye surrounding the pupil. Like a snowflake, every iris is unique. Even genetic twins have different iris patterns.

Georgia Southern students stand about 14 inches from an iris camera that takes a picture of the iris. There are no bright lights, lasers or contact of any kind.

The digital data is compressed by system software into a small algorithm identifying about 240 points on the iris. Yet the resulting small, 512-byte templates contain more data than is collected in creating templates for finger, face and hand biometrics combined.

The iris templates, stored on a computer, cannot be re-engineered or reconstituted to produce a visual image. “The results are stored in a mathematically computed template [no images] that can’t be hacked and used by a third party,” Ortshied says. “There are some that think you can steal a person’s iris biometric and then own it forever. That’s just not the case.”

Ortshied said one of the best-selling points of an iris reader is that it can integrate with virtually any other system such as access control or a one-card solution. He said it’s a matter of removing an existing reader and replacing it with an iris reader.

An iris-based biometric system can also save money by eliminating the value of stolen cards or card passbacks allowing nonpaying students to eat for free, he said.

In the future, Wynn says, he can see the iris-based system being used to control access to university datacenters and other critical operations. Access cards, which may be lost or stolen, only provide information on the original owner. “An iris scan could tell us exactly who tried to gain entry,” he says.