Turkey’s Anadolu Etap, one of the largest fruit and vegetable juice providers to Europe, faced problems accurately calculating payroll which most organizations will never encounter. Each day during harvest season, thousands of employees spread out across seven large fields to pick crops. It is the nature of the local workforce that creates the largest challenge.

New laborers arrive daily seeking work. Once hired, they might work a few days and then leave before returning a week later. Inconsistent schedules made standard time cards virtually impossible to manage. The company sought a system with better accuracy and more simplicity.

Anadolu Etap eventually chose an iris based iris recognition reader from Iris ID. This final choice was made after trials of other systems which on first look appeared to be less expensive. The selection process took significant time as it included the evaluation of several alternatives.

Company officials asked their security integrator, Ergosis Systems, for help in replacing the traditional paper based time cards. A review of smart cards did not offer an improvement as authorizing, printing, distributing and tracking cards for thousands of on-and-off workers contributed to the human resource management nightmare. Given the high employee turnover rate, the recurring cost of smart cards was considered a downside risk negatively impacting system ROI in the long run. Also, improper use of the cards threatened to cut into the company’s profits.

Next, Ergosis suggested a fingerprint biometric system. But that was quickly ruled out as fruit pickers generally have soiled hands, and often have numerous cuts or scars on their fingers and hands which result in inaccurate identification and time-consuming re-enrollments. Some employees wear special environmental suits making a contactless system a better choice.

With fingerprint eliminated , that led testing facial recognition which was rejected as changes in hairstyle, beards and moustaches, glasses, headwear and other factors can reduce accuracy. While sometimes less expensive, the accuracy of facial recognition is much less then iris recognition. Finally, an iris-based system was suggested, said the integrator’s Görkem Acarlar.

“Most of these workers have little education, so the technology chosen would also have to be very easy to use,” he said. “An iris-based system from Iris ID is very simple to use and is contactless. It’s also the most accurate which met another of Anadolu Etap’s major requirements.”

But there were still challenges to meet.

A field test proved the workers could easily use the iris readers. During registration, field supervisors used a specialized iris reader camera to capture the data from each workers’ iris. System software creates encrypted templates that are stored in onsite computer terminals. These templates identify the employees as they arrive and leave work each day. Readers match employees’ irises with the templates in a process that takes less than one second.

To handle the environmental concerns, Ergosis built small, three-sided shelters to shield the readers from direct sunlight. The readers operate in temperatures between 0ºC to 50ºC, but Ergosis installed low cost contact heaters to protect against occasional cold mornings. 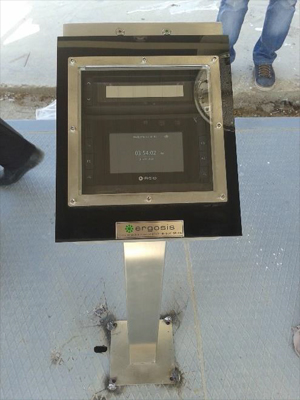 In addition to its speed and accuracy, the iris recognition system also has the smallest outlier population of all biometric technologies. Very few people can’t use the iris-based system as most people have at least one eye. Also, the iris is a well-protected organ, and remains stable throughout a person’s life, eliminating the need for re-enrolling workers.

The system currently has more than 10,000 enrolled workers, and can easily scale to 100,000 persons in each iris reader. More are being added on an almost daily basis, said Acarlar.

“Once a worker is in the system, it doesn’t matter how often he may leave,” he said. “When he returns, the iris system immediately recognizes him.”

Additionally, the contactless iris-based technology minimizes the transfer of germs or bacteria as there is no direct employee contact with the Iris ID biometric readers.

Another system benefit is the elimination of a payroll fraud scheme known as “buddy punching.” Employers using time cards are susceptible to employees clocking in or out for a friend. Even the smallest error in employee payroll can create significant operating costs for any organization. Studies by the human resources consulting firm, ADP, have shown that payroll errors and fraud may add up to 10 percent to an organization’s payroll costs.

The base iris system was completed by Ergosis two years ago, and the integrator continues to update and add readers as necessary. Also, Anadolu Etap is considering installing the system for other company facilities in the near future.

“This project offered some significant challenges, however the iris biometric system met each and every one of them,” said Acarlar. “A difficult problem has been solved and our customer is very satisfied.”