Ingenio Azucarero Injiboa is one of the country’s largest sugar mills, which processes sugar cane into raw sugar for export to refineries in North America, Europe and Japan. Sugar is El Salvador’s second leading agricultural crop after coffee. 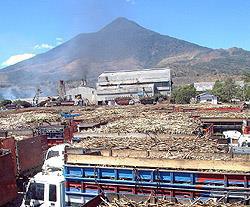 s of the privately owned mill faced the challenge of getting workers through shift changes without long delays, while maintaining accurate records of hours worked. Standard time clocks and cards resulted in long queues. There was also the potential of fraud, such as “buddy punching,” where an employee clocks in or out for a friend.

At shift change, the clatter of time clocks has been replaced by a quiet time-and-attendance system based on iris recognition. The lines have been reduced and time fraud eliminated. The system, from Cranbury, N.J.-based Iris ID, is based on the same biometric technology used in high-security government facilities, military bases and research laboratories. 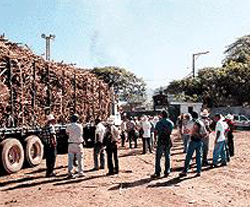 Until recently, cost and usability concerns have limited the technology’s application in a Central American sugar mill. But recent technological advancements and reductions in product and deployment costs, have made iris-enabled time and attendance a practical investment for organizations of almost any size.

He said the mill had even installed – and soon removed – face and fingerprint recognition systems. With these technologies, changes in weight, hairstyle, finger or hand size, cuts or even the effect of the mill’s manual labor could trigger the need for re-enrollment in the system, he said.

The iris, the colored part of the human eye surrounding the pupil, is like a snowflake – every one is unique. A subject’s left and right iris are as different from each other as they are from any other individual’s. Even genetic twins have different iris patterns. It has been calculated the chance of finding two randomly formed identical irises is 1 in 1078 – a number roughly equal to the estimated number of atoms in the known, observable universe.

The structure of the human iris is fixed by about one year in age and remains constant (barring trauma, certain rare diseases, or some ophthalmologic surgical procedures) over a person’s life.

Also, iris recognition has the smallest outlier population of all biometric technologies. Few people can’t use the iris-based system as most people have at least one eye. In a few instances even a blind person has successfully used iris recognition as the technology is iris pattern-dependent, not sight dependent.

Another factor was scalability. Ingenio Azucarero Injiiboa hires hundreds of temporary workers during the six-month sugar harvesting and processing season. According Brand, all of those factors made the iris-based system the best choice for the mill.

“The iris-based system offered the most speed, highest accuracy, reliable performance and secure operations – all in a very demanding environment,” Brand said. “Plus, it is the only technology proven to work with the entire company employee population.”

The mill’s iris-recognition system consists of a digital video camera used to capture the data from each employee’s iris. System software creates templates from the iris photos that are stored in the terminals used to authenticate employee identifies.

The enrollment process is safe as it involves no lasers or bright lights. During enrollment, Brand said, mill employees could stand as far as 10 inches away from the camera and even wear glasses or contact lenses without compromising system accuracy.

The camera captures more than 240 unique characteristics to form an algorithmic template of each employee’s iris. The resulting 512-byte templates are encrypted and can’t be re-engineered or reconstituted to produce any sort of visual image. Yet the small templates contain more data than is collected in creating templates for a finger, face and hand combined. This is one reason why iris recognition can accurately authenticate identities even when significantly less than the whole eye is visible.

Brand said full enrollment mill employees took less than two minutes each and included instruction on how to use the system for time and attendance. In addition to the temporary employees hired each harvesting season, the mill also enrolled its administrative, technical and security personnel.

During peak season, mill officials set up four reader stations for employees to clock in and out on each shift. Using the iris recognition hardware is easy and intuitive. Proximity sensors activate the equipment, which incorporates mirror-assisted alignment functionality and audio auto-positioning prompts. Once the authentication is completed, a 4.3-inch color LCD displays the date and time, employee’s name and ID number.

Authentication takes less than two seconds. As a result, the long lines of employees from punch-card time clocks have been eliminated.

Joel Moran, head of information systems development for Ingenio Azucarero Injiboa, said he was happy to have replaced time cards and badges that were capable of being lost or altered.

“The iris recognition system is a precise time and attendance solution for us,” Moran said. “It has reduced our payroll and administrative costs and helped to eliminate time fraud. Those savings have provided a high return on investment.”

Even the smallest error in employee payroll can create significant operating costs for the mill or any other organization. Studies by the human resources consulting firm, ADP, have shown that payroll errors and fraud may add up to 10 percent to an organization’s payroll costs.

Moran said as an added plus, the iris-based technology also inhibits the transfer of virus or bacteria, as there is no direct employee contact with the biometric reader.

Iris recognition technology – until only a few years ago considered by many the stuff of a spy movie – is now used daily in rural El Salvador, as well as authenticating millions of identities in airports, border crossings, correctional institutes, data centers, office buildings, hotels and many more locations on six continents.